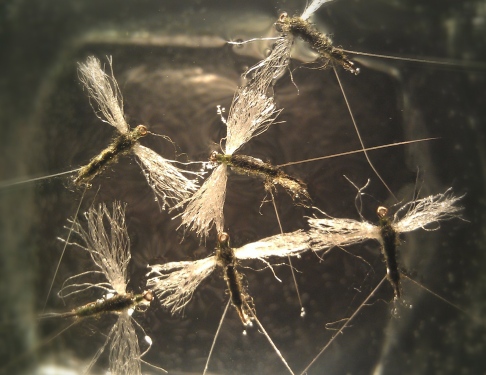 Ok, let’s get the technical mumbo jumbo out of the way first.  I tied these BWO spinners, dropped them in a glass of water and snapped their pic with my cell phone.  Why the cell phone?  Why not?  It has more mega-pickle than my Nikon SLR.   So there you have it…you know all my secrets..ha!  The truth is I have been slowly shedding gadgets and gizmos over the past few years.  I don’t carry my SLR everywhere I go like I used to.  I travel light.  I carry fewer flies.  I even quit drinking booze.  I know!  What kind of self respecting outdoors man doesn’t steal a sip of booze from their flask now and then?  Me I guess.  I loved to fish from the first time I held a rod in my hand as a young boy.  It was pure passion.  Somewhere along the line the liquor became more important than the fish.  The passion got diluted in a bottle of Johnnie Walker Red.  At some point I realized I stopped being a fisherman and was just a drunk with a rod in his hand.  It’s kinda like being the guy who cheats in golf.  You don’t think anyone knows…but everyone knows.  So anyway…pour me a nice cold BWO martini.  It’s purity for me from now on.  Wish me luck.  I still dream of scotch.

Throw Down Hopper, a photo by Goyo P on Flickr.

I can’t really say that it’s been a long cold winter. It’s been mild. I can’t say that I should’ve tied more flies this winter. I tied a lot. But still there’s something about Winter that gets me down. Chalk it up to lack of sunlight. Chalk it up to missing sitting in a cold stream with my face pointed skyward soaking up the warm sun and smelling the sweet scent of pine in the air. Outside it’s a cold dark world . But it’s no match for hope and imagination. Happiness exists in the tiny world of an immitation hopper.

Every Tuesday evening I go to my friends house to tie flies. Since I’ve been tying a lot of BIG flies lately I felt the need to make a few tiny ones. I have a special fondness for quill bodied flies for some odd reason. They look more natural to me. It probably doesnt make much difference to the fish….but if I like them better I believe I’ll fish them better.

I’ve been trying to get more creative with fly photography….but I still dont take it too seriously. It’s mostly playful experimentation. I like the reflection on this polarized filter I had laying on my studio table. I may try some more reflection style photos the next time I tie dry flies.

Tommy Lynch was in the house last night. Tommy is a guide from Baldwin, MI who primarily fishes the Pere Marquette River.

Once a week I attend “Bar Flies”, a fly tying event at the Dexter Pub in Dexter, MI. Mike Schultz of Schultz Outfitters organizes the sessions.

They had a large turnout last night. There weren’t many empty seats. Mike teaches a group of beginners in the back. Up front, the featured tyer has his work captured on video which is projected on a big screen. I usually order a Wolverine Premium Lager from the Wolverine State Brewing Company.  I like to sit in front of the fireplace but last night I sat against the back wall and listened to the guides talk about all their adventures in Alaska, Cabo and the Keys.  It’s always fun to see all the tying vices and benches in the group.  Some are pretty sophisticated, others are not.  My favorite one of all is a simple clamp vice mounted to a 16″ diameter log which was about 4″ thick.  Another guy sported a unique German vice which bordered on sculpture.  The ages range from high school age to senior citizens.  The high school kid is a fly tying wiz.  It’s nice to see young kids with a passion other than video games.  Due to the large turnout we only tied two flies…but they were articulated so you could argue we actually tied four flies which were then linked together.

As much as I would love to use this fly it will have to sit in my fly box for a few months. But I will get a chance to cast a few of my Senyo patterns on the Vermillion River in Ohio this weekend.  My friends and I were going to drift the Muskegon but a snow storm is moving in.  So, we decided it might be best to wade instead of drift.  It’s a pain in the ass to manuever the driftboat in high wind…at least it is for me.

Meat Locker, a photo by Goyo P on Flickr.

So far this year tying flies at the Dexter Pub has been a blast. You dont have to go to many sessions before you realize these aren’t the flies your grandpa used to throw. Greg Senyo stated before his class that all purists should leave now! Ha! It used to ruffle my feathers a little to see so much synthetic material in flies but not anymore. I guess it’s partly because my natural flies are not as effective. With such limited time to fish and the price of gas it’s nice to actually catch a fish when I go fishing. I mean that is why I’m out there.

Senyo’s Gangsta Intruder, a photo by Goyo P on Flickr.

I just wanted to give a little plug to Schultz Outfitters for organizing the “Bar Flies” classes at the Dexter Pub. The instructors have been top notch. I’m loving all the warm water patterns they have provided over the past few weeks. Now I just need to get out and get a few of these wet.

Last night I attended the “Bar Flies” class sponsored by Schultz Outfitters of Ann Arbor. The class was located at the Dexter Pub in Dexter, MI. This was a practice popper. I’m using a Renzetti travel vice with an obsolete clamp mechanism. I cannot tighten the hook down enough to prevent it from slipping during hair packing. So I will need a sturdier vice to do a better job at making deer hair poppers.  None the less, I still had a great time.  We also tied the famous AuSable River Madsen Skunk and the ID Hex.

I recently met at a friends house to tie a few flies. I decided to tie a few Parachute BWO’s. I dont tie flies to fill my fly box. And, they are rarely ever picture perfect. But they are effective. I dont believe it’s absolutely necessary to tie perfect flies. I think it’s important to know how to cast and present the fly without spooking the fish. I think it’s important to have patience while fly fishing. But mostly I believe you should have faith. Anyone who doesnt have faith in their fly will not pay close enough attention to notice the subtleties of fly fishing.

I’m not in love with my flybox but flies do have deep meaning.  Tiny pieces of sharp steel wrapped in thread and feathers are more than just imitations of life. To me they are a physical biophillic connection to the natural world. Somewhere in youth we are told that insects are bad. But what harm is there in a Mayfly? Some species can only live in clean water. They mate, and then die on the surface film to provide food for fish. Anyone who has taken the time to look at one up close knows how beautiful they are. My flies will never be as beautiful as God’s creation. I’m just trying to come close. Flies are lightning rods for life. Hook a trout and be energized. Releasing a trout defies Darwin. We keep trout around because they are beautiful. Without us they would surely die.  Because Trout dont live in dirty we protect our rivers and streams where they live. But humans can live in dirty…and do…which makes me wish I lived in a trouts world.